"A hospital can require a disabled nurse to satisfy the same high performance standards that apply to nurses generally, the U.S. District Court for the Western District of Michigan held in Harrison v Spectrum Health. While a hospital, like other employers, must provide reasonable accommodations to enable employees with disabilities to perform essential job functions, lowering job standards as an “extraordinary accommodation” is not required by the ADA. "

"The Harrison case involved a legally blind call center nurse with complications from multiple sclerosis. Call center nurses at Spectrum were required to manage numerous phone calls from patients seeking emergency medical assistance; to follow hospital-approved protocol to assess callers’ symptoms; to refer callers to the appropriate resources; and to use computer software to complete necessary administrative tasks. To help Ms. Harrison adequately perform these essential functions of her job, Spectrum provided her with several pieces of new equipment, including a 21-inch monitor, a video magnifier with enhanced brightness, contrast and color saturation capabilities, and computer software to operate the video magnifier. With these accommodations, she was able to perform her job duties from 2001 through the end of 2006, and received exemplary performance reviews."

"In December 2006, Ms. Harrison fell and fractured her hip. After undergoing hip replacement surgery, she was off work for four months on medical leave.  She returned to light duty in April 2007 on a reduced schedule consisting of two four-hour days per week.  Plaintiff’s doctor determined that her vision had not changed significantly due to the accident and surgery, and there was no reason she could not successfully return to her former position."

"When Ms. Harrison resumed work, Spectrum assigned Ruth Stilley, a call center supervisor, to help her become reacquainted with her job duties. Ms. Stilley noticed that Ms. Harrison was having difficulty performing basic tasks such as using the fax machine, logging onto the computer, and opening her administrative software. More significantly, Ms. Harrison mishandled calls and provided harmful and potentially life-threatening advice to some callers. For example, she suggested medication for a seven-month-old baby even though the dosage chart indicated the medication should not be given to children less than twelve months old.  She failed to immediately instruct a caller to take her son to the emergency room when the child could be heard struggling to breathe. She failed to assess whether a caller’s husband was exhibiting life-threatening symptoms before obtaining his medical history, and she failed to follow hospital protocol in other situations. As a result, Ms. Stilley did not feel comfortable allowing Ms. Harrison to take live triage calls on her own."

"Ms. Stilley repeatedly asked Ms. Harrison if anything could be done to bring her back up to speed more quickly and help her meet Spectrum’s performance standards. Ms. Harrison complained that she was having difficulty reading the computer screen, so Ms. Stilley helped her increase the magnification of the text and adjust the height of her work station. The hospital also provided Ms. Harrison with a new computer monitor with a special anti-glare screen. When a new computer system was introduced, Ms. Harrison was given 16 hours of individual training instead of the eight hours of group training given to other call center nurses. Even with these additional accommodations, Ms. Harrison’s performance did not improve."

"On June 26, 2007, Ms. Harrison was discharged, primarily because of Spectrum’s determination that she was unable to “manage calls in a safe manner.” In February 2009, Ms. Harrison filed a lawsuit claiming that Spectrum had violated the ADA by failing to accommodate her disabilities."

"As the Fourth Circuit concluded in another hospital accommodation case, Shin v. University of Maryland Medical System Corporation (discussed in an earlier blog post), the court found that Spectrum had more than met its legal obligation to reasonably accommodate Ms. Harrison’s disability throughout her employment. In granting summary judgment to the hospital, the court emphasized that Spectrum was legally required to provide only reasonable accommodations to Ms. Harrison, not extraordinary accommodations. The court pointed out that even after Spectrum had furnished Ms. Harrison’s work station with enhanced equipment and improved lighting, and provided six weeks of training after her leave of absence, Ms. Harrison was still unable to follow hospital guidelines to assess patient symptoms and dispense medical advice, which were the essential functions of her job."

"This case, like Shin, demonstrates both the importance of documenting efforts to make reasonable accommodations to a healthcare employee’s disabilities and the limits on a hospital’s obligation to make accommodations that would demonstrably interfere with patient care or pose safety risks."

This entry was written by Neil Grindstaff.

http://www.littler.com/publication-press/publication/hospital-may-require-disabled-nurse-satisfy-performance-standards
Posted by Donna Maheady at 9:34 AM No comments: 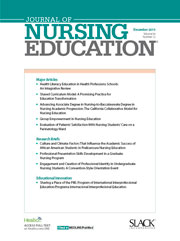 Faculty have reported a significant increase in the number of nursing students with disabilities; however, misinformation regarding legislated changes in the definition of a disability, as enacted in 2008 under the American with Disabilities Act Amendments Act, has contributed to faculty confusion when working with students with disabilities. This article identifies the circumstances under which nursing faculty are legally required to provide reasonable accommodations for students with disabilities, as defined under the Americans with Disabilities Act of 1990 as amended in 2008, and the strategies faculty may use to assist students to successfully complete core requirements. When this knowledge is integrated into a nursing program’s culture and curriculum, students with sensory loss, paralysis, mental illness, learning disabilities, limb differences, chronic illnesses, or other disabilities associated with impaired bodily functions can successfully complete nursing programs and provide excellent care to clients, the profession, and their communities.