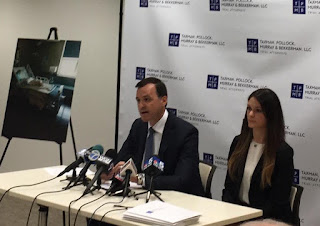 Attorneys representing two nurses and a nurse’s husband called a press conference to counter official statements that nurses taken hostage at Northwestern Medicine Delnor Hospital were not injured in a May 13 incident in which a jail inmate was shot dead by a SWAT team.

The horrific events at Delnor Hospital cannot be forgotten or pushed under the rug. Nurses need to stand together for much needed change.

With thanks to Janie Harvey Garner, RN (Show Me Your Stethoscope) for her passionate "shift report" on this situation.

And to Zubin Damania, MD (ZDoggMD) for sharing this story. He spoke with the nurse who was beaten and raped. Please share his call to action.

We can all do something! Share the story on social media, send a card or note of support, talk about it with your colleagues, family and friends. Silent No More!

The nurse with dementia: Where do we go from here?

The British Royal College of Nursing (RCN) recently shocked many by passing a resolution that nurses with dementia should be supported to continue practicing as long as possible. Their reasoning was that most fears of these nurses constituted discrimination based on old prejudices and misconceptions.

The public, including many nurses, assumes that individuals are “suddenly struck incompetent” at the time of diagnosis. In fact, cognitive changes usually occur in minor, subtle ways over a matter of years.

There are many individuals with dementia who continue to lead productive lives for years after their diagnosis. Like those with other disabilities, they find ways to adapt their routines to compensate for a faulty memory. They write books, give talks to raise awareness, and weigh in on policy matters affecting those with dementia.

In January of 2016, Frani Pilgrim was busy in the Allergy and Asthma practice where she served as a nurse specialist. At 56 years old, she relished the “dream job” she had excelled in for the past ten years. But when she could not master the new electronic medical record system, both she and her coworkers began to wonder why.

Frani was caught off guard one day when her beloved physician mentor said to her, “Frani, you’re not yourself. Something’s wrong. We need to find out what.” With four generations of EOAD behind her, Frani suspected her fate even before neuropsychiatric testing confirmed it. Having watched her grandfather, father and a brother live with EOAD, Frani fully understood the weight of her diagnosis.

A year and a half later, Frani’s life has changed dramatically. Because of concerns about liability, she chose to resign her position at the time of her diagnosis, saying, “How would a family feel if I made a mistake, and they found out I have Alzheimer’s?” Exiting her nursing practice was “the hardest thing I have ever had to do. Nursing is different from other careers. It’s not a job. It’s who we are.”

Frani experienced a period of deep despair, “I spent one month in bed, crying.” “Nursing was everything to me, but I felt I had no choice but to give it up.” Over time, Frani moved through her acute grief and began to see a silver lining to her circumstances. Away from the stress and physical demands of nursing, her symptoms improved. With time on her hands, she focused on home and family relationships which deepened in a positive way.

“I’m a survivor”, Frani explains. “I’ve survived breast cancer, cervical cancer, and a near-death experience with asthma. But Alzheimer’s is different. You know there’s no going back.” Frani underwent driver’s testing at the Division of Motor Vehicles which she passed with flying colors. She plans to return once a year for testing, saying, “I know it’s not always clear to a person what their own degree of impairment is. I don’t want to take any chances.”

Today, Frani keeps physically active and is quick to share her experience with others. She recently enrolled in a clinical trial which gives her great comfort. “Even if it doesn’t help me, maybe it will help my son. I look at him and his physical resemblance to his grandfather, and I pray a lot.”

When I asked Frani what she most wanted her fellow nurses to know about her illness, she said without hesitation, “That people don’t become idiots when they are diagnosed.” She recounts the pain of family prejudice, including those who would no longer allow her to babysit her grandchildren once they learned of her diagnosis.

Alzheimer’s Disease and related dementias now affect over 5 million people in the US alone. Great Britain, Australia, Canada and Asia all face the far-reaching socioeconomic effects of dementia in an aging population as well as those with EOAD. As the average age of clinicians increases, the question of what to require of nurses with dementia is only due to become more common. Great Britain has chosen inclusion of nurses with dementia.

Additional questions arise such as, is a nurse with mild dementia a greater risk to patients than a stressed, exhausted bedside nurse? What about the nurse with diabetes whose cognition can drop with a low blood sugar? Or, a nurse with Post Traumatic Stress Disorder faced with a trigger? Are there teaching and some management positions that nurses with EOAD might fill?

A knee jerk reaction of, “That’s crazy! Patients must be protected,” may have to be weighed with the reality of mild dementia with minor lapses and an aging nursing workforce. One thing is for certain; this question will only arise more frequently in the years to come. It is already upon us and in need of answers.

Thank you Gail for shedding light on this important topic!

Please feel free to weigh in on Gail's point of view.

About the author:
A practicing nurse since 1980, Gail Weatherill specializes in the care of people living with dementia. A graduate of the University of Virginia, she has obtained board certifications in Alzheimer’s education and care. Her years in critical care, home health and long-term care in the US and in Saudi Arabia influence her far-reaching perspective on nursing care. Gail resides in Charlottesville, VA where she can easily travel to her state capitol and the United States Capitol for advocacy work for dementia care and safe staffing ratios. You can find her at the site named for her professional alter ego, The Dementia Nurse ™. http://thedementianurse.com
Posted by Donna Maheady at 9:21 AM No comments: