Hurricane Hugo: Remembering nurses who worked through the storm 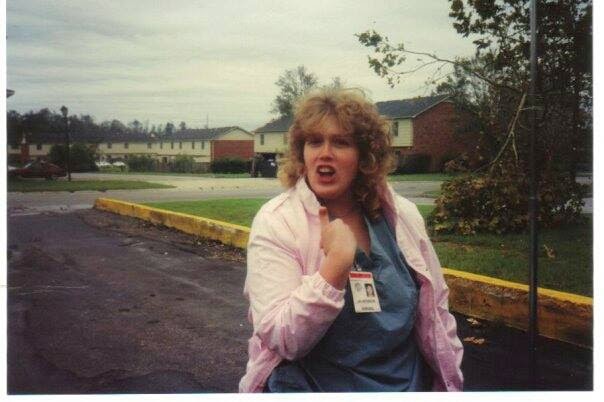 Around midnight on September 22, 1989 Hurricane Hugo made landfall just north of Charleston, South Carolina at Sullivan's Island as a Category 4 storm with estimated maximum winds of 135-140 mph. Hugo produced tremendous wind and storm surge damage along the coast and even produced hurricane force wind gusts several hundred miles inland into western North Carolina. At the time, Hugo was the strongest storm to strike the U.S. in the previous 20-year period and was the nation's costliest hurricane on record in terms of monetary losses (~$7 billion in damage). It is estimated that there were 49 deaths directly related to the storm, 26 of which occurred in the U.S., Puerto Rico, and the U.S. Virgin Islands.
http://www.weather.gov/ilm/HurricaneHugo
Imagine how many nurses worked through the storm. Were they injured? Did they suffer from PTSD? Did they receive mental health counseling following the storm?
Margot Withrow and John Owen share vivid details of working through the storm.
“I was recruited to a hospital in Charleston. I started on Monday with an eight-hour orientation and Hurricane Hugo hit that Thursday. When the storm started to make the news the day before, my dad called and urged me to come back home, but I felt I couldn’t “desert the ship.” The travel company said they couldn’t ask us to stay and risk our lives, but made a verbal promise of a $1,000 bonus if we stayed and worked. I stocked up on Sternos and Vienna sausages.
When I went to work Thursday morning, it was raining “cats and dogs.” I worked 12 hours, then took a cold shower in an operating room and went to catch some sleep in a converted room on a hospital ward. The windows were taped to prevent shattering. Transformers popped like fireworks and cars were floating in the water.

In the moment before the power went out, the TV announced that Hugo was here. The windows blew out, and I moved to the hallway fighting back panic. The backup generators took over. While sitting in a wheelchair in the hall with my head against the wall, I could feel the steel beams moving. I felt I was going to die—oddly peaceful.


An elderly woman coded. The elevators were out and she had to be carried up four flights of steps as emergency response continued. The unit was crazy. Ventilators cut on and off. The patients had to be manually bagged by lay staff and therapists.

In 40 hours, I had maybe 20 minutes sleep and had to face another 12-hour shift. The lab had flooded and the ICU had no windows. The head nurse hadn’t made it in due to the weather, so as the RN, I was in charge of the ICU with six patients, all on ventilators. Of the other two licensed practical nurses, one had no ICU experience and the other had forgotten her blood pressure medicine.
The septic system had backed up and the smell was awful. I wondered constantly what I had forgotten to do... And then a freshly showered resident turned up asking for labs. I wondered where he had been.
By Friday, the hospital had run low on food but the roads were said to be passable. Trees were down and the National Guard was out. It was like a warzone. I felt addled and disoriented. I was off for the weekend.

While the hospital had generators, my apartment was without power for three weeks. Some weeks later the travel company sent a letter of commendation thanking all who had stayed and risked their lives. The bonus was only $100.

In April, I began seeing a therapist weekly, at first for weight issues but later with a diagnosis of depression and PTSD. I did this on my own dime, picking up extra shifts to cover. I had survivor’s guilt and often second-guessed myself, not to mention suffering anxiety in thunderstorms. My insurance didn’t cover the therapy. Because of the stigma associated with mental health issues, I feared losing my job if I were to tell anyone.”

Read more of this story written by Margot Withrow and John Owen in chapter 12 "One straw too many: Nursing through blood clots, depression and Hurricane Hugo" in The Exceptional Nurse: Tales from the trenches of truly resilient nurses working with disabilities

Posted by Donna Maheady at 5:54 AM