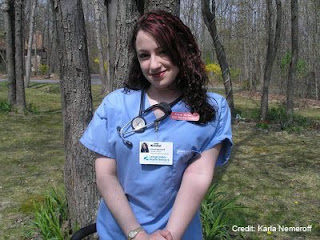 As we continue to celebrate the anniversary of the signing of the Americans with Disabilities Act (ADA) by President George H.W. Bush on July 26, 1990, let's celebrate the accomplishments of Kristal Nemeroff, RN!

Some days, Kristal Nemeroff needs her wheelchair, but usually her walker suffices. She is slower than the students who buzz around her, but her motivation is in overdrive. At 27, Kristal is the nurse at Hamilton Elementary School in rural Pennsylvania, a few miles from where she grew up.

Securing the job and completing her nursing certificate required fortitude and determination in a profession that she (and many others) once thought was off-limits to people with disabilities.

"Rules and bones are meant to be broken," she wrote in Scrubs magazine chronicling her challenging journey. The quote has deeper meaning for Kristal, who has endured a lifelong battle with osteogenesis imperfecta, commonly known as brittle bone disease, a genetic disorder that affects the protein collagen found in bones, teeth, skin, tendons, and parts of the eye. She has endured 10 major surgeries, 25 broken bones, and months of immobility.

For most of her life, Kristal has participated in research at the Eunice Kennedy Shriver National Institute of Child Health and Human Development (NICHD) aimed at improving the management of her condition.

She credits the Americans with Disabilities Act (ADA) - which marks its 25th anniversary this month - for paving the way to her career. "It's so cool to be a role model," she says. "The ADA protected my rights and now I'm making sure my students know that, whether they have a disability or a disease, they should follow their dreams." 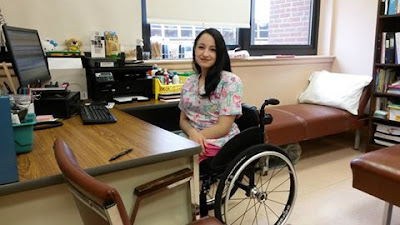